The Ancient Kingdom of Breifne
The Land of The Brave

Hill of Tara
Seat of the High King

Located between Navan and Dunsaughlin it is said you can see one quarter of the landscape of Ireland from the hill.

It was also used as a ceremonial and burial site, although many of these monuments have not survived the test of time, Duma naGiall (the mound of hostages) still stands strong as the oldest visible monument on the Hill of Tara. The mound covers a passage tomb built 5000 years ago that was used for burying human remains.

In this respect, in the ancient days, the Hill of Tara was also used in conjuction with Newgrange which was the family tomb for the O’Reilly kings of Breifne.

It is believed that on his first mission to Ireland, Patrick travelled to Tara to confront the High Kings and their ancient religion to try and convert them to Christianity.

Modern day facilities at the visitor centre include an audio visual show, while guided tours of the Hill of Tara are available on request. Exciting new research and excavations by the Hill of Tara Discovery Programme research team continue to add to our understanding of the site. Access to the Hill of Tara is open all year around. 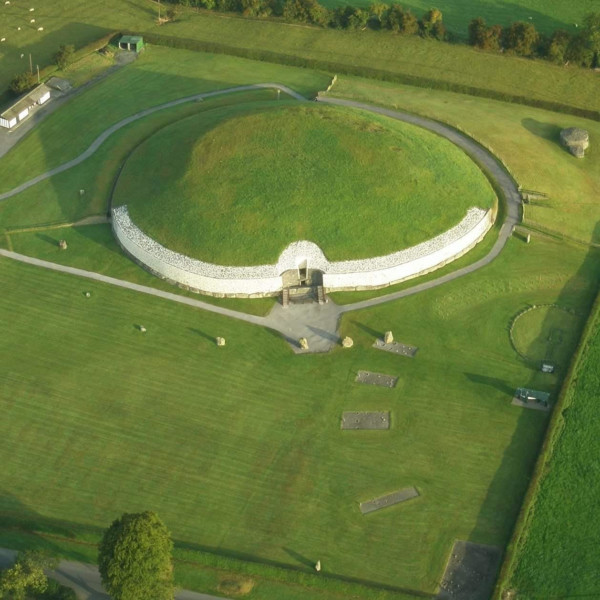 Newgrange in County Meath is a 5200 year old ancient temple with a passage tomb, which makes it older than Stonehenge and the Great Pyramids of Giza.

In the winter solstice sunrise above the entrance to the passage, an opening called a roof-box is lit up with a beam of light from the sun. As the sun get higher the passage gets brighter until the whole chamber is illuminated. The purpose of the roof-box is to light up the chamber on the shortest day on the year.

Newgrange contains various examples of Megalithic art including the triskele-like features found on the entrance stone. It has been described by as one of the most famous stone in the entire repertory of Megalithic art.

Newgrange is recognised as a place of astrological, spiritual, religious and
ceremonial importance.

Cabra Castle now a luxury 4 star and formerly known as Cormey Castle (after the local townland where it was built) is one of two castle in Kingscourt.

The original, now ruined, castle can be seen near the wishing well in Dún a Rí forest park, formerly part of the Cabra Estate. This was the primary seat of the king of Breifne.

The original castle was originally owned by the O’Reilly family until it was confiscated in the late 16th Century by Cromwell’s orders and given to Colonel Thomas Cooch, grandson to Sir Thomas Cooch KC; who had migrated to Donegal in the 17 th Century, having been granted 1,000 acres by James I. Cooch, married Elizabeth Mervynand they had an only daughter and heiress, Elizabeth. Her first marriage ended when she was widowed in 1685 and Elizabeth then married Joseph Pratt, who lived not far off at Jaradice, Co. Meath, a property which he received when he migrated from Leicestershire. The castle was destroyed during the Cromwellian War and the Pratt Family continued to reside near the Wishing Well, occupying Cabra land, including the site of the present town of Kingscourt.

*Unfortunately little is known of the history of when the O’Reilly family owned the castle as all records would have been confiscated.

The current Cabra Castle was constructed for the Foster family, a local “Ascendancy” family whose main seat was at Dunleer. In 1813 Pratt bought the caste and moved from Cabra House to the castle in that year. For a few years, he continued to use the original name of Cormy Castle for his new home, but later – in about 1820 – Colonel Pratt renamed it Cabra Castle, and it has been known by this name ever since. In December
1950 it was left to the nearest male relative of the Pratts – Mervyn Sheppard but the burden of death duties, taxation, rates, cost of repairs to the castle, and farm losses made it impossible for him to live there and in 1964, a local family – the Brennans, bought Cabra Castle. They renovated the building and converted it into a 22-bedroom hotel.

It was in their ownership up until 1986, when it was then sold to a group of Arabs. They closed down the hotel and kept the building as a private house. Having closed the castle, with a view to retaining it as a private house, political and economic circumstances in the Middle East prevented the new Arab owners from further enjoyment and development of the property. It effectively lay idle until 1991, when it was purchased by its present owners, the Corscadden family, who re-opened it as a hotel.

Dún na Rí is Irish language for Fort of the King which is the Kingscourt. This is where the seat of the king of Breifne was located.

Dun a Rí Forest Park in town of Kingscourt, Co. Cavan forms part of what was formerly the Cabra Estate.

From the third to the sixth century this territory was occupied by the Gailenga, a warlike people who were established here to guard the frontiers of the Kingdom of Tara.

From the sixth century onwards, following the disintegration of Tara, the power of the Gailenga gradually declined, although the Annals of Ulster provide evidence that as late as the eleventh century they still wielded considerable power in the district.

With the decline of the Gailenga, the O&#39;Reilly family grew in power in the area and ruled the territory until the end of the 16th century.
It was then that the O’Reilly family lost the territory to an Anglo-Saxon family by the name of Fleming.

In 1666 Colonel Thomas Cooch, forebears of the Pratt family came into possession of the territory and it remained in the Pratt family until 1959 where the Forest &amp; Wildlife Services acquired the property.

Dún a Rí is a forest of 229 hectares. 146 hectares of this land is managed as a commercial forest. The remainder of the forest is predominantly woodland accessed by the public as a recreational facility rich with heritage. There are a number of different walking paths. There are four walks of approximately 1.5 – 2km in length all with points of interest like a wishing well, pond, ice house and castle ruins.

Kells
Origin of the book of Kells

Kells in County Meath has a great religious significance, Kells Monastery originally included four high crosses built in the 9th century by the monks of St Colmcille’s of Iona, Scotland in 804. The famous Book of Kells was completed at the monastery, which also features a round tower.
The 9th century sandstone Market Cross, known as the “Cross of the Gate”, was originally located at the Eastern Gate of the monastery and currently stands outside the old Kells Courthouse. Its carvings signified that a fugitive could claim sanctuary once inside the boundary of the monastic area. The West Cross or the Broken Cross stands 3.5 meters high; while only the shaft remains, the cross is adorned with carvings on all four sides.
The South Cross, or the Cross of St Patrick and St Columba is closest to the round tower and thought to be the earliest of the Kells crosses. Standing 3.3 meters high, it is carved from a single block of sandstone. The Unfinished Cross, towers approximately 4.75 meters high over the surrounding graveyard on the south side of the present day church.